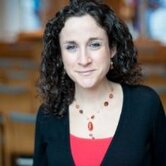 Michelle Dardashti serves as the Rabbi of Brown RISD Hillel and Associate University Chaplain for the Jewish Community at Brown.  As a rabbi, Michelle views herself as a leader, teacher and guide and feels privileged to accompany students on their religious/spiritual journeys during their time at Brown.  Daughter of an Iranian hazzan (cantor) and American folk-singer of Eastern European descent, and married to an Australian Jew, Rabbi Dardashti brings to her roles a deep understanding of global Jewry, Jewish music, practice and culture, and a commitment to fostering pluralistic communities.

Rabbi Dardashti was ordained and received a Masters in Jewish Education from the Jewish Theological Seminary (JTS). Prior to this position, she served as Director of Community Engagement at Temple Beth El in Stamford, Connecticut, a position in which she worked specifically to cultivate those at the fringes of community (potentially just entering or just exiting), such as young families, teens, and young professionals, through a grassroots model of engagement. Prior to that role, Dardashti was the Marshall T. Meyer Rabbinic Fellow at Congregation B'nai Jeshurun in Manhattan for two years, where she taught, oversaw a conversion program, and had the privilege of speaking and leading prayer within one of the country's most vibrant congregations.

Before JTS, Rabbi Dardashti lived in Uruguay: teaching at a Jewish day school, running Hillel programs, and writing for the Jewish Telegraphic Agency; and in Israel: first on a Dorot Fellowship and, later, working for the Nesiya Institute.  During her rabbinical school years in Manhattan, she served as Director of Family Programming at Shaare Zedek; educator for Interfaith Community; chaplain at Bellevue Hospital; and rabbi and cantor for JTS's free, walk-in High Holy Day services. She was also trained in Congregation-Based Community Organizing through Jewish Funds for Justice and traveled to El Salvador as part of an American Jewish World Service Rabbinical Student Delegation.

Rabbi Dardashti lives in Providence with her husband, Nathan Sher, and children Eden, Miya and Lavi.