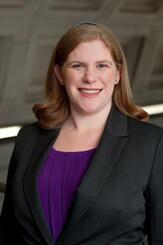 Rabbi Rachel Zerin is one of the rabbis at Temple Emanu-El of Providence. She was ordained from the Jewish Theological Seminary in 2015, where she also received her MA in Talmud. While at JTS, Rabbi Zerin served as student rabbi of Temple B’nai Shalom of Benton Harbor, MI and the Flemington Jewish Community Center in NJ, intern at Rutgers Hillel, and High Holiday rabbi/cantor at Syracuse University Hillel and Temple Aliyah of Needham, MA. Additionally, she completed a unit of Clinical Pastoral Education through JTS at the YM&WHA, where she offered pastoral counseling to seniors.

Rabbi Zerin’s interests are many, and include Talmud, social justice, and interfaith dialogue. Regarding the latter, Rabbi Zerin worked for the Cambridge Inter-Faith Programme’s Summer School at Cambridge University, and was founder of If We Serve, an interfaith service-learning retreat. Prior to her rabbinical studies, Rabbi Zerin studied at the Conservative Yeshiva in Jerusalem, and earned her BA in Voice Performance and Religion from Syracuse University. A native of Massachusetts, Rabbi Zerin is thrilled to have returned to New England as part of the Emanu-El community, along with her spouse Sam and their son Ezra.