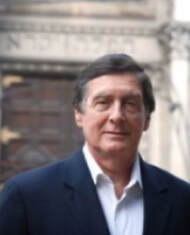 Rabbi Daniel Kripper was born in Buenos Aires, Argentina. He completed his studies in Sociology and Social Psychology at the University of Buenos Aires. Throughout his extensive career, he has specialized in education, life coaching and spiritual counseling. He received his Rabbinical Ordination from the Latin American Rabbinical Seminary in Buenos Aires, after finishing his rabbinical program in Jerusalem and postgraduate studies at the Hebrew University of Jerusalem.

Rabbi Kripper had the great honor of being the assistant to his mentor, the late Rabbi Marshall T. Meyer. He was a professor and dean at the Rabbinical Seminary in Buenos Aires. He has served as a rabbi for congregations in Brazil, Argentina, Uruguay, and the United States.

Rabbi Kripper completed his professional training in Clinical Pastoral Education (CPE) in the United States and directed healing and emotional support programs for the ill and their families. He has been deeply involved in interfaith dialogue and has acted as an advisor for international interfaith organizations. In 2003, Rabbi Kripper received an Honorary Doctorate from the Jewish Theological Seminary of America for his successful service in spiritual leadership. Moreover, he is the author of "Living Fully," and several articles and publications.

Since 2013, he served as rabbi at Beth Israel Aruba. He has joined Temple Shalom, Middletown, Rhode Island in early 2022 to provide spiritual leadership. ​Rabbi Kripper is married to Flora Brykman; they have three children and five grandchildren.