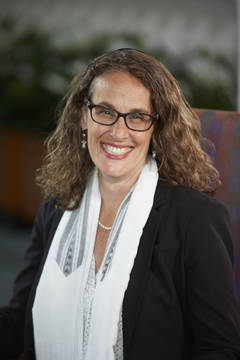 Rabbi Sarah Mack  is the Senior Rabbi of Temple Beth-El. She has served Temple Beth-El since 2003 upon her ordination from the New York campus of Hebrew Union College-Jewish Institute of Religion. Rabbi Mack also spent a year studying at the Pardes Institute of Jewish Studies in Jerusalem. A native of Seattle, WA, Sarah graduated from Brandeis University in 1996 with majors in Near Eastern and Judaic Studies and English.

Rabbi Mack is the immediate past President of the Board of Rabbis of Greater Rhode Island. Rabbi Mack has served previously on the boards of the Jewish Alliance, the Chaplaincy Center and JCDSRI. She sits on the executive committee of the RI Interfaith Coalition to Reduce Poverty and on the board of the Center For Reconciliation. Rabbi Mack was selected by the Boston Consul General to travel to Israel with Colleagues from around New England in 2018. Rabbi Mack was chosen as an American Jewish World Service Global Justice Fellow in their 2019-2020 cohort.

Rabbi Mack is one of the founders of the Rhode Island chapter of Sisterhood Of Salaam Shalom. She has worked with community partners to encourage interfaith youth dialogue between Jewish, Muslim and Christian teens as well with the Breaking Bread program.

Rabbi Mack enjoys running, gardening and baking in her free time. She and her husband Jeffrey Isaacs love raising their two sons in the warm community found in the smallest state in America.
​
Ordination
Hebrew Union College-Jewish Institute of Religion