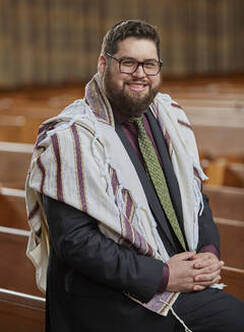 Rabbi Preston “Pesach” D. Neimeiser came to Temple Beth-El in Providence in 2021. He was born in Tallahassee, Florida the second son of two activists dedicated to the American labor movement. The Neimeiser family joyfully celebrated many holidays and life-cycle events at Temple Israel of Tallahassee, Florida – where they remain members to this day. From a young age he was moved by the melodies of our people and captivated by our stories.

After many summers spent at the URJ camp Coleman, he dove into the song leader track at the URJ Kutz camp in 2009. Following his studies during the Fall 2010 at Heller High (formally NFTY-EIE) in Israel, his love for Jewish history and peoplehood continued to grow thanks to a rigorous and experiential curriculum focused on Hebrew and Jewish History. Preston served on the boards of his youth group and regional NFTY and worked as a song leader throughout the years at synagogues and Hillels as well as at Jewish summer camps. As one of the inaugural fellows of the Nachshon project, he studied at the Rothberg International School of the Hebrew University in Jerusalem and had the opportunity to develop relationships with some of Israel’s top movers and shakers. He returned from Israel and implemented a program focused on Israeli music and poetry for Jewish youth at camp; and organized an Israeli Film festival on campus before receiving his bachelor’s degree in Psychology with a minor in Hebrew from the Florida State University.

Following both his first and second years of rabbinical school, Preston worked as an educator for NFTY in Israel sharing his love of Israel with teens from across North America. He encouraged them to take an active role in grappling with Israel to deepen their connections to their people. He served as a rabbinic intern at Kol HaNeshama in Jerusalem and as an educator and youth professional at Temples Emmanuel and Shaaray Tefila in New York City and Temple Beth-El of Great Neck. As a fellow of the JOIN for Justice seminary fellowship, he learned the tactics of grassroots organizing and partnered with the organization OneTable to host interfaith Shabbat dinners for aspiring clergy across faiths and denominations. Through the 92nd Street Y Innovation fellowship he endeavored to deepen his understanding of how effective institutional change is made and received mentorship from leading innovators in the Jewish world. He also deepened his learning with the Shalom Hartman Institute and ARZA as a rabbinical student fellow and served as the rabbinic intern at the home of Positive Judaism, Tamid: The Downtown Synagogue, for two years. Now a 5th-year Rabbinical student at HUC-JIR in New York with monthly pulpit responsibilities in High Point, NC and a multi-faith organizer with the New Sanctuary Coalition he is an aspiring community builder with a passion and commitment to justice and the Jewish people Rabbi Neimeiser was ordained  May 2021.