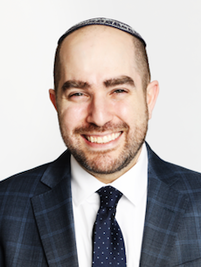 Rabbi Michael Fel is the Senior Rabbi of Temple Emanu-El of Providence. Originally from Miami, Florida, Rabbi Fel earned a bachelor's degree in Business from the University of Miami. He went on to receive his ordination from the Jewish Theological Seminary where he learned as a Schusterman Rabbinic Fellow and earned a Master's Degree in Midrash and Scriptural Interpretation from the Graduate School.

Rabbi Fel loves connecting with people and building relationships between different segments of the Jewish community. During his eight years at Temple Emunah, Rabbi Fel produced over 200 Shabbat videos garnering over 85,000 views allowing congregants to connect to the shul, created the Inclusion Committee to raise awareness about inclusion, earning Temple Emunah recognition as one of the original Ruderman Synagogue Inclusion Program congregations, established Emunah Explorers, a day-time programming initiative connecting retirees, stay-at-home-parents, and others through day trips, lunches, and social programs, and developed the Next Dor Corps program, encouraging post-b’nei mitzvah students to stay involved by reading Torah, leading religious services, and volunteering in communal programs.

Rabbi Fel currently serves as President of the Greater Boston Cluster of the Rabbinical Assembly and was selected in 2018 to participate in the Israeli Consul General to New England’s Rabbinic Trip to Israel.

He is married to Shayna (past NERUSY president), and together they rear three adorable kids: Nadav, Eliana, and Lior.