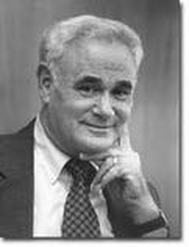 Rabbi James B. Rosenberg writes a biweekly column (“It Seems to Me”) that appears each issue of The Jewish Voice and Herald. Rabbi James B. Rosenberg
Rabbi Rosenberg retired as spiritual leader of Temple Habonim, a Reform congregation in Barrington, in July 2007, having served the community for 33 years. He has taught courses in Jewish studies at Tufts University and at Connecticut College in New London, Conn.
He has been writing poetry for more than 20 years. Some of his poems and translations of modern Hebrew poetry have appeared in national periodicals. In 2007, he completed a 10-year term as poetry editor of the CCAR Journal of Reform Judaism.
Rabbi Rosenberg has written many book reviews and opinion pieces that have appeared in a variety of national Jewish magazines.  He has written more than 100 monthly columns for the Barrington Times, and his op-ed pieces have appeared in the Providence Journal.