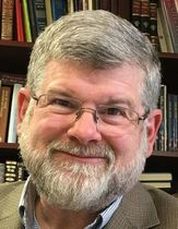 Rabbi Jeffrey W. Goldwasser has served as the spiritual leader of Temple Sinai since 2014. His warm personal style, spirituality and commitment to social action set the tone for the congregation. He is a recognized leader in the Rhode Island faith community.
​
Rabbi Goldwasser has helped make Temple Sinai a leading center for Jewish culture, learning, spirituality and activism in the state. Under his leadership, Temple Sinai has become a venue for nationally renown Jewish musicians to perform. He is known for his dynamic, engaging and accessible teaching style – particularly his teachings on the weekly Torah portion every Shabbat morning that focus on personal meaning and spiritual growth. He also has led joint courses with Holy Apostles Catholic Church investigating texts that Judaism and Christianity share and deepening the relationship between Jews and Christians. He has played a central role in organizing the state's faith community in activism on issues relating to poverty, immigration, gun safety, reproductive rights, and safe working and living conditions in nursing homes.

Rabbi Goldwasser is the Vice President of the Board of Rabbis of Greater Rhode Island. He serves on the Community Relations Council of the Jewish Alliance of Greater Rhode Island. He also serves on the Executive Committee of the Rhode Island Interfaith Coalition to Reduce Poverty. In 2016, he was the recipient of the Jewish Alliance's Tilles Award for service, leadership and commitment to Jewish community relations. He is a recipient of the Reform Movement's Fain Award for Social Action. He has previously served congregations in North Adams, Massachusetts, and Stuart, Florida.

Rabbi Goldwasser and his wife, Jonquil Wolfson, are the parents of two adult daughters, Talia and Eliana.​